I spent last week at the Perimeter Institute in Waterloo, Ontario. Undoubtedly one of the highlights was Juan Maldenena’s keynote on resolving black hole paradoxes using wormholes. Matt’s review of the talk below is well worth a read!

Perimeter is hosting this year’s Mathematica Summer School on Theoretical Physics. The school is a mix of lectures on a topic in physics (this year, the phenomenon of quantum entanglement) and tips and tricks for using the symbolic calculation program Mathematica.

Juan Maldacena is one of the lecturers, which gave me a chance to hear his Romeo and Juliet-based explanation of the properties of wormholes. While I’ve criticized some of Maldacena’s science popularization work in the past, this one is pretty solid, so I thought I’d share it with you guys.

You probably think of wormholes as “shortcuts” to travel between two widely separated places. As it turns out, this isn’t really accurate: while “normal” wormholes do connect distant locations, they don’t do it in a way that allows astronauts to travel between them, Interstellar-style. This can be illustrated with something called a Penrose…

The cosmic microwave background (CMB) is a key observable in cosmology.  Experimentalists can precisely measure the temperature of microwave radiation left over from the big bang. The data shows very small differences in temperature across the sky. It’s up to theorists to figure out why!

The most popular explanation invokes a scalar field early in the universe. Quantum fluctuations in the field are responsible for the classical temperature distribution we see today. This argument, although naively plausible, requires some serious thought for full rigour.

Talks by cosmologists often parrot the received wisdom that the two-point correlation function of the scalar field can be observed on the sky. But how exactly is this done? In this post I’ll carefully explain the winding path from theory to observation.

First off, what really is a correlation function? Given two random variables

we can (roughly speaking) determine their correlation as

Intuitively this definition makes sense – in configurations where

There’s another way of looking at correlation. You can think of it as a measure of the probability that for any random sample of

there will be a value of

within some given distance. Hopefully this too feels intuitive. It can be proved more rigorously using Bayes’ theorem.

This second way of viewing correlation is particularly useful in cosmology. Here the random variables are usually position dependent fields. The correlation then becomes

fixed. The magnitude of this vector provides a natural distance scale for the probabilistic interpretation of correlation. We see that the correlation is an avatar for the lumpiness of the distribution at a particular distance scale!

Now let’s focus on the CMB. The temperature fluctuations are defined as the percentage deviation from the average temperature at each point on the sky. Mathematically we write

defines a point on the unit

-sphere. We want to relate this to theoretical predictions. Given our discussion above, it’s not surprising that our first step is to compute the correlation function

where the average is over the whole sky with the angle

fixed. This average doesn’t lose any physical information since there’s no preferred direction in the sky! We can conveniently encode the correlation function using spherical harmonics

are known as the multipole moments of the temperature distribution. Substituting this in the correlation function definition we obtain

. We’re almost finished with our derivation! The final step is to convert from the correlation function to it’s momentum space representation, known as the power spectrum. With a little work, you can show that the power at multipole number

This is exactly the quantity we see plotted from sky map data on graphs comparing inflation theory to experiment! 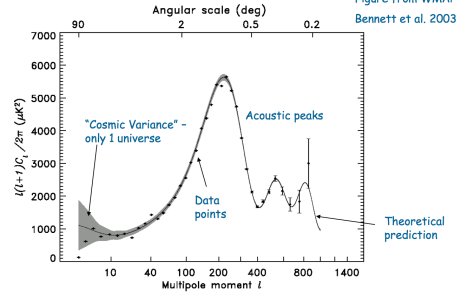 From the theory perspective, this quantity is fairly easy to extract. We must compute the power spectrum of the primordial fluctuations of the inflation field. This is merely a matter of quantum field theory, albeit in de Sitter spacetime. Perhaps the most comprehensive account of this procedure is provided in Daniel Baumann’s notes.

Without going into any details, it’s worth mentioning a few theoretical models. The simplest option is to have a massless free inflaton field. This gives a scale-invariant power spectrum, which is almost correct! Adding mass corrects this result, providing fluctuations in the power spectrum. This is a better approximation, but has been ruled out by Planck data.

Clearly we need a more general potential. Here’s where the fun starts for cosmologists. The buzzwords are effective field theory, string inflation, non-Gaussianity and multiple fields! But that’ll have to wait for another blog post.

Find Me On .SE

a random walk through Computer Science research, by Adrian Colyer

Reasons for Being
Gödel's Lost Letter and P=NP

a personal view of the theory of computation

Why we see what we see

Five minutes with a scientist

Just like the horse whisperer - but with more pages

The trials and tribulations of four gravitons and a postdoc

A blog about probability and olympiads by Dominic Yeo